The fields of Plock Court once again played host to a weekend of music and sport, as Sportbeat Festival returned for a second year.

The team at Absolute Creative paid the grounds a visit, lured in by the prospect of hearing the likes of Razorlight, Soul II Soul, Reverend & The Makers, The Hoosiers, and – our favourite act of the weekend – Jaguar Skills. 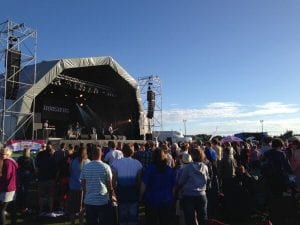 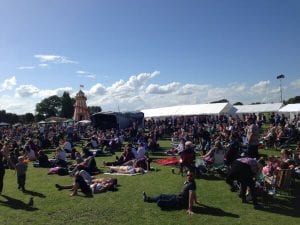 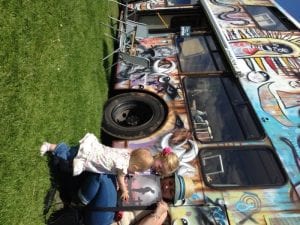 Having narrowly missed out on some Coldplay tickets the day before, Ian was keen to erase that memory, and did so in style by throwing some mad shapes throughout the day in his yellow wellies. However, The Absolute team were out in force for Jaguar Skills strolled on stage, concealing his face but not his DJ mastery. The rain didn’t deter us as the DJ ninja weaved in and out of music old and new, sending us on a nostalgic journey and then propelling us back to the present.

As well as the main stage, the festival played its part in nurturing upcoming local talent with the smaller Guildhall and Academy stages. Situated on the periphery of the festival site, teams took part in small, sporting competitions, including Rugby 7’s, Volleyball, and Netball. For those who weren’t feeling too competitive, there were activities such as Laser Tag and Zorb Football which looked appealing but, considering I looked twice the age and size of everyone taking part, it was wiser for me to sit out.

Considering the festival only occupied a section of Plock Court, they managed to pack in many more activities to satisfy their attendees. Interspersed around the site were market stalls, a vintage fair, an art exhibition courtesy of Free Art Friday, swinging boats, and a camping site. For a festival in its youth, it showed a lot of promise, and we are eagerly awaiting its return next year; fans are already plugging their suggestions for the acts they think should be on the bill for the next event. We can’t wait to see who they choose.

Sitting on the sofa at home, armed with your phone or laptop. That’s the new war room for tackling...

Ever had a question on your mind, no matter how trivial, and you just need to find the answer to...